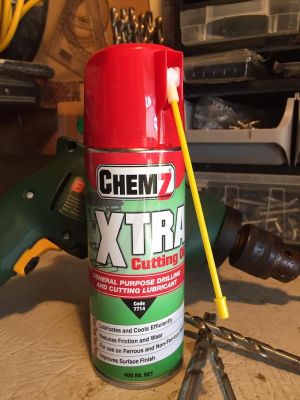 AT CHEMZ WE CONSTANTLY STRIVE TO MEET OUR CUSTOMERS NEEDS AND, AFTER SOME EXTENSIVE CHANGES BASED ON YOUR FEEDBACK, we've combined the superb Chemz XTRA drilling and cutting lubricant with the Chemz DNA (Directional Nozzle Applicator) for precise application with no waste directly to the work surface.

Chemz XTRA is a general purpose drilling and cutting lubricant with excellent hang on properties for vertical surfaces. XTRA lubricates and cools efficiently to reduce friction & wear. For use on ferrous and non-ferrous metals 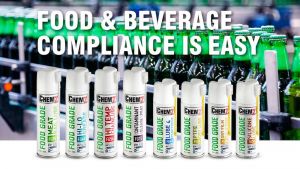 All our products have MPI & AsureQuality certification.  Our range is also NSF approved giving the Beverage Sector and exporters peace of mind too. 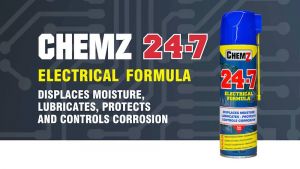 Contains VCI (Vapour Control Inhibitors). The ONLY New Zealand made VCI aerosol on the market 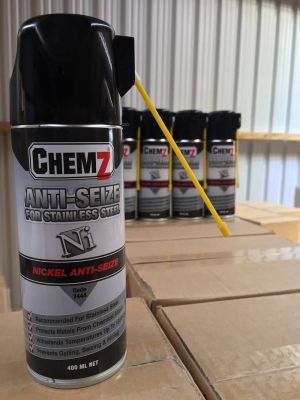 Here's what Chemz are all about...

Chemz® is a 100% New Zealand owned and operated manufacturer of specialised aerosol and bulk chemical products engineered for specific industry sectors.  They are a rare breed – a home-grown enterprise, based in the Hawke's Bay, we believe in “Keeping it Kiwi”, something we have done right from the start and intend to keep doing for many years to come.  They work with leading an industrial chemist to research and develop formulations for task and trade specific products. With the best formulations adopted after extensive testing and outcome analysis.

Chemz® recognises that highly specialised products require the corresponding level of technical support, they have a team of Technical Sales Specialist to assist all end user inquiries and training.  In response to thier current customers’ needs they have grown their product range from five electrical cleaners and four electrical lubricants to over 90 specialist aerosol and bulk products servicing a wide range of industry sectors.

Aside from the above products offered for this initiative, Chemz Ltd has developed a high spec’d range of industrial and engineering aerosols which can be viewed at www.chemz.co.nz

Like it or not, the XMAS holidays are nearly here 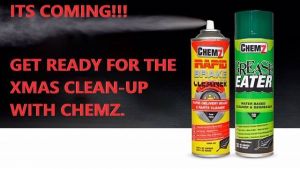 Get your maintenance and clean-up products organised with CHEMZ Rapid Brake Clean and CHEMZ Grease Eater. Contact your local distributor or visit us at: www.chemz.co.nz 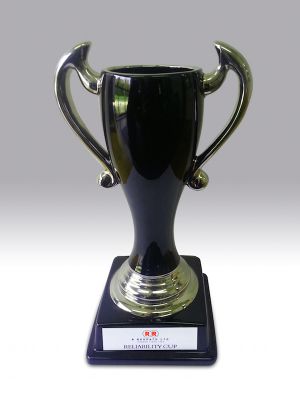 This trophy was presented to Chemz from Redpaths for being the most reliable supplier to all their branches during 2014. 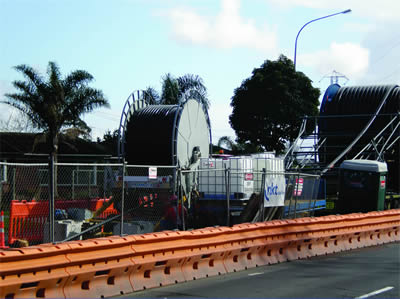 The objective of the project was to provide security of electricity supply and to reinforce the electricity transmission network through Auckland and to the Northland region by providing an efficient and secure 220 kV underground electricity supply between the Pakuranga and Penrose substation facilities.

The route between Pakuranga and Penrose is approximately 9,150m long and required open cut trenching throughout the length of the route (excluding Waipuna and Ti Rakau Bridges) and impacted on public highways, rail tracks and water course way. The project also involved the decommission of the existing 110kV overhead transmission line between the Pakuranga and Penrose substations.

The underground transmission circuit route was buried in a trench within the road, approximately 2m wide by 1.9m deep. Normally there would have been access pits every 200m along the 9,150m route to facilitate the pulling of the 146mm diameter cable through the 250mm diameter ducts laid in the trench. This would have resulted in over 40 access pits along the route.

The different approach taken by Balfour Bealty was to work with NKT cables, the only company in the world capable of producing 220 kV cable in lengths of excess of 1000m. By using these extreme cable lengths the number of access pits was reduced to nine, with resulting benefits in reducing cable joints and the disruption to traffic flows during the cable installation phase of the project.

Pulling 1000m lengths of cable, weighing around 40 tons through undulating underground ducts presented unique problems, with the allowable pulling force limited to prevent damage to the cable. The solution was provided by New Zealand owned and operated specialty chemical manufacturer CHEMZ, with their cable pulling lubricant. Blue Lube. The contractors used 1000 litres of Chemz Blue Lube for every 1000m of cable.

A rubber slug, attached to a 3 ton capstan winch was used to spread the Chemz Blue Lube through the conduit, lubricating the duct as it was pulled through. The procedure ensured that enough Blue Lube Lubricant was discharged at locations where extra lubrication was needed at major bends, angle changes or depth changes in the duct route, ensuring that there was as little friction as possible between the cable and the duct. Another innovation created by the Balfour Bealty team was to adapt an agriculture spray unit to apply additional Chemz Blue Lube to the cable as it left the drum and was pulled into the ducts. This additional lubricant assisted in keeping the pull force required within the allowable parameters. The lubrication spray unit was a unique innovation and will be sold at the completion of the project, giving a competitive advantage to another contractor in future cable pulling projects in this country.

Gordon Hockaday (Project Engineering Manager) says "Chemz Blue Lube was a critical component in the successful outcome of this ground breaking 1000m plus cable pulling concept. Chemz worked with us to adjust the viscosity of their Blue Lube to suit the new spraying technology we developed for this project. We estimate that by being able to pull these 1000m plus lengths of 220 kV cable using Chemz Blue Lube, a saving of over $700,000 was achieved on this project".

Wanaka graced the fifth annual Gathering of Geezers with a classically picturesque afternoon; the perfect to welcome for our 25 Geezers and 250 guests to the Warbirds and Wheels Museum. The evening was all about our 250 guests mingling and hearing first-hand about the tales, triumphs and sometimes disasters of each Geezers career. For those not up with the motorsport lingo, a Geezer is a retired legend of motorsport who has won a major New Zealand title or a world title of motorsport or has made a major contribution to the sport.

This year the evening was kicked off with our keynote speaker Tony Quinn giving us an insight into his earlier life and what it was like to find his passion only to give up on it but surely return to it later in his life. The evening was run with a sports café-style theme, where three panels of three Geezers were hit with the interesting sometimes tough questions by our MC Stephen McIvor from Sky Sports Sky Speed. The panels were divided up in 3 categories, the first, Motorcycles hearing from Graeme Crosby, Aaron Slight and Mike Pero. The second panel was Supercars hearing from Jim Richards, Greg Murphy and Craig Baird. The last panel of the night was all about International Motorsport hearing from Heather Spurle, Steve Horne and Graham Standring.

As it came to the end of the night the charity auction got under way raising an astonishing $24,750 for the two charities involved. Upper Clutha Children’s Medical Trust and Warbirds Over Wanaka Community Trust. A great atmosphere created by the interaction of Geezers and our guests and the phenomenal support and enthusiasm towards our charity auction made for a fantastic night for all. 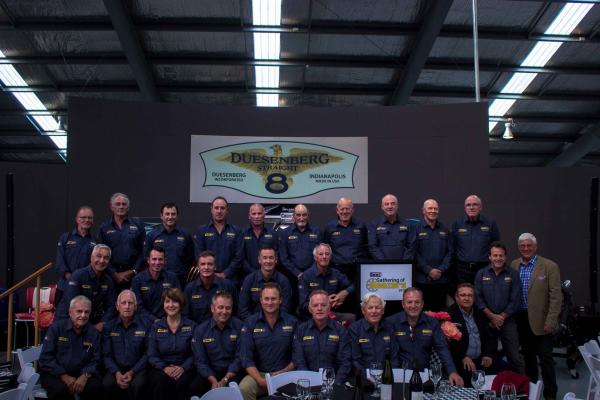 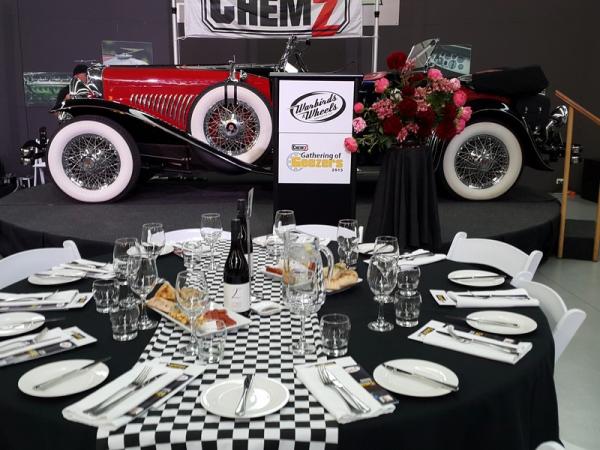 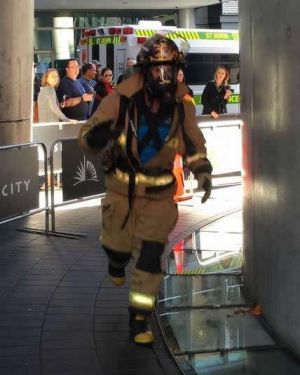 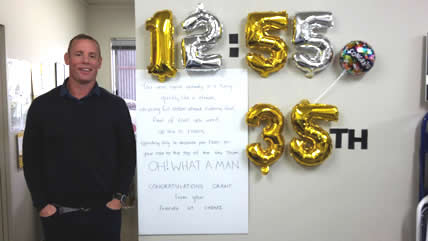 From us all her at CHEMZ we would like to congratulate our new General Manager Grant Simpson. Grant along with hundreds of other men and women fire fighters took to the Sky Tower in aid of Leukaemia & Blood Cancer NZ.

Chemz® is a 100% New Zealand owned and operated manufacturer of aerosol and bulk chemical products made for specific industry sectors, with a product range that focuses on trade quality cleaners, lubricants, coatings and maintenance products.